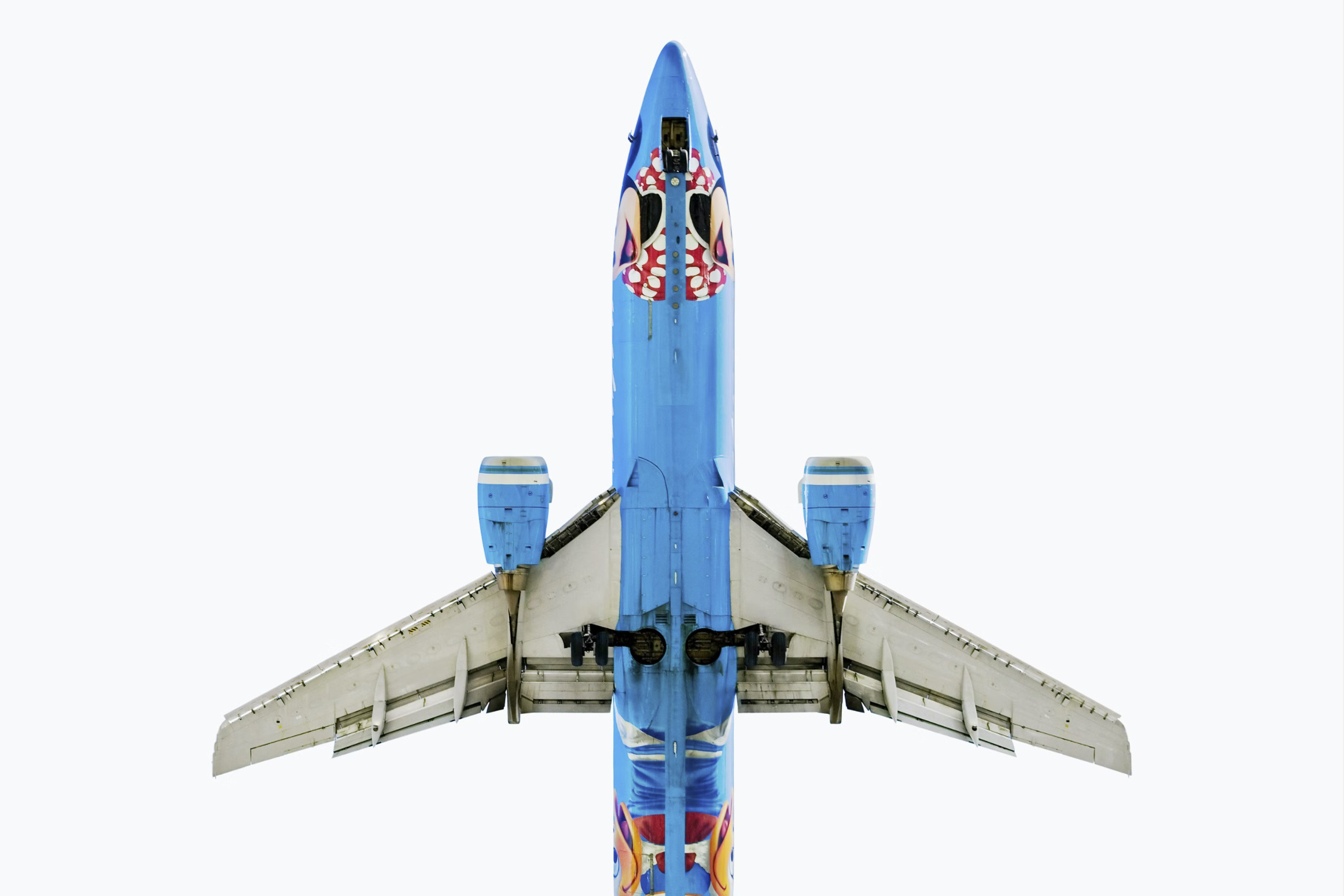 Taking to the Skies: Interview with Jeffrey Milstein

Fellowship: First off Jeffrey, can you talk about your interest and passion for airplanes and flying? Was there an initial spark for this, or was it an interest that grew over time?

Jeffrey Milstein: As child, I was drawn to aircraft, and earned my pilots license while still a teenager. A favorite pastime was hanging around the end of the runway at the Los Angeles International airport. I loved having the aircraft fly so low overhead that I could almost reach up and touch them.

As an adult, I returned to the runway at LAX with a camera to recapture those moments. Over time the work evolved into a series of highly detailed, formal symmetrical portraits, exploring the typology of aircraft. As a typology I am exploring the uniqueness of each model as well as the similarities they share. Often shot when a plane is flying close to 200 mph directly overhead, the images freeze time and motion. If the images remind us of the magic inherent in flying, they also remind us of our vulnerability. Perfectly suspended, hovering in space stripped of context, the photographs reveal the complexity, beauty, and power of the aircraft.

Fellowship: Can you talk about your background as a photographer, and the sort of trajectory your career has had to this point?

Jeffrey: My first career was architecture, but from an early age my two interests and talents were in art and flying. I drew and painted and built and flew model planes. As a 17 year old, with a new pilots license, I flew around LA, where I grew up, in a Cessna 150, taking pictures of the plane and of the city. I was fascinated by how things looked from the air; that you could see everything, and how the man-made landscape fit the geography of the land. There was something about being above it all that I loved.

Then I went to Berkeley where I studied architecture and art. I became a licensed architect practicing in NYC. I was interested in low cost and solar housing and had DIY projects published around the world (bolt together house, tent house).

I was always interested in graphic design, and In the early eighties I started a notecard company called Paper House Productions. The cards were photographic and carried in all the Museum shops. I also did cards and other graphic work for MoMA.

After studying photography with Jay Maisel, In 2000, I decided to sell the company which had grown to have 20 employees and 700 sku’s. I decided to do photography full time, and I began taking pictures of aircraft from below while landing. This became a highly collected portfolio of aircraft portraits, and was published by Abrams as Aircraft the Jet as Art in 2007. Two solo museum shows include the Ulrich Museum of Art, and a year -long show at The Smithsonian Air and Space Museum. Other shows were at Reagan International Airport and Atlanta International Airport.

Other work included a cruise ship typology, a book of Cuba street photographs, and a typology of Palm Springs trailer houses.

Fellowship: When did you begin photographing airplanes, and how did your approach to shooting them evolve over time? Can you walk us through the actual practicalities of making this work?

Jeffery: Around 2000, I started shooting at LAX. I liked the look of the aircraft shot on cloudy bright days, and the photos evolved into a typology of aircraft portraits with a light gray background. They must be photographed perfectly symmetrical to be part of my portfolio. It is not so easy to get that way since the aircraft are constantly correcting course. I would bring a folding chair and spend days at the end of the runway. For most shots I used a 645 Contax with ever evolving Phase One digital backs, and the legendary Zeiss 45-90mm.

Fellowship: Finally, what do you hope that viewers take away from the work that you shoot? Is it simply a matter of sharing your passion for airplanes with a larger audience?

Jeffrey Milstein is a photographer, architect, and pilot. His photographs have been exhibited and collected throughout the world, and have been featured in publications including The New York Times, Time, Esquire, Fortune, Harpers, Vanity Fair, GEO, GQ, Paris Match, Liberation, and Die Zeit. He has won numerous awards, including Graphis Gold Awards, and has been featured on CNN and the CBS Evening News with Scott Pelley.

His work is in the collections of museums including The Scottish National Galleries, LACMA, George Eastman House, Musée de l'Elysée, Portland Art Museum, Akron Art Museum, and the Smithsonian National Air and Space Museum, where he had a year-long solo show of his aircraft. His books include: Aircraft the Jet as Art, Abrams, Paris From the Air, Rizzoli, LA NY, Thames and Hudson, and Cuba, Monacelli. He is represented by major galleries in the US and overseas. His studio is in Kingston, New York.