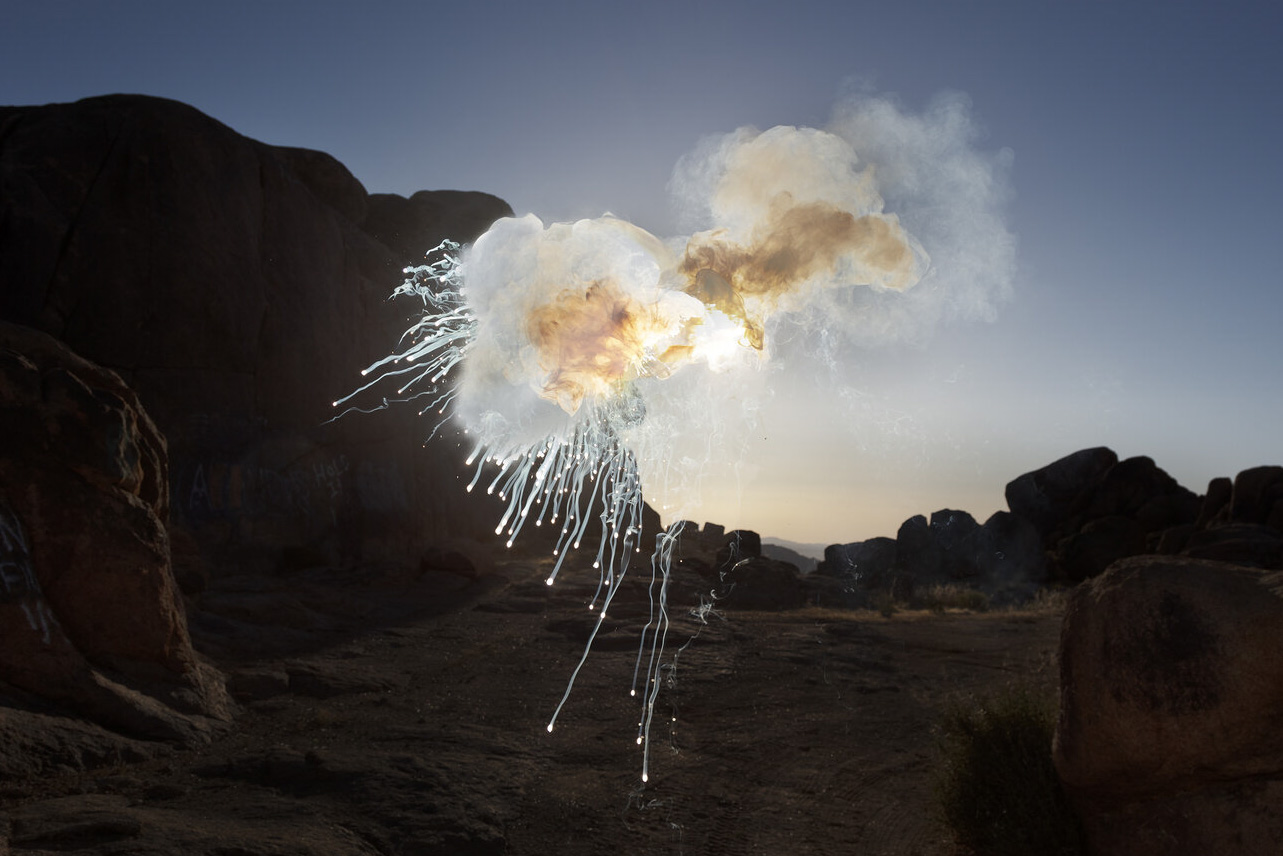 A Fleeting Sense of Control

In Exploded Views, Kevin Cooley plays with fire to create and document controlled explosions in the desert. His analytical approach to his experiments reflect both a precision and primitive curiosity for the elements. Chemicals are mixed and delicately adjusted, resulting in tails of smoke and ember that emanate from iridescent pops of color.

It’s easy to appreciate these works as mere aesthetic objects all of which embody Cooley’s striking visual language. At face value they are studies of time and motion not unlike Eadweard Muybridge’s Animals in Motion (1887), Dr. Harold Edgerton’s Bullet Through Apple (1964), or even the dynamic compositions of Ori Gerstch’s Exploding Flowers series; they, too, sit suspended between the seduction of still life and scientific investigation.

Yet in his on-going project, Still Burning singular denotations give way to roaming swaths of scorched land. As our eyes train outwards, we are faced with a complexity that has been there all along: what happens when we’ve lost control over the experiment? Cooley’s editorial projects for The New Yorker and Harper’s Magazine incorporate his interests in phenomenological inquiries only now through a wider cultural lens.The aura of which is both wonder and anxiety-inducing, as he captures the fires the past several years in California as they devour half a million acres of land near the Lassen National Forest alone. The project brings a more acute awareness to what his other projects have only implied.

Instead of Cooley constructing small fires, Still Burning forces us to admit we’ve lost control by witnessing large ones. As an example, two striking images point to a larger cognitive dissonance: in the foreground, a group of men playing basketball on a court or a blue-tiled poolside oasis exist in, what is clearly tenuous terms, at the foothills of what appears to an expanding horizon of wild fires. The men still shoot hoops. The pool placid enough for an afternoon swim. This work so succinctly captures a certain kind of violence. Fire is present, but it’s not the catalyst.